Fed’s next approach to growing concerns about the coronavirus

What can the FED do?

In addition to continue to keep the rates low, the Fed will have to do some kind of quantitative easing and swap lines with other banks to influence the value of the dollar.

How does the Federal Reserve’s decision to cut rates impact the economy and mortgage rates?

The Federal Reserve does not set mortgage rates

The Federal Funds rate is a suggestion of what banks should charge each other to borrow money overnight so banks can meet their reserve requirements.

This approach is more likely to work on short term loans and variable rate loans but not  as much on long term loans like 30-year fixed mortgages. 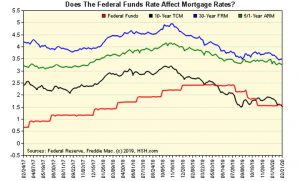 What can the Federal Reserve do to keep long-term interest rates low?

Mortgage rates are influenced by many different factors including demand from homebuyers and homeowners for new loans, current economic conditions, inflation, and demand from investors to buy mortgage loan debt.

What the Fed is likely to do, to help the economy is to do quantitative easing.

Quantitative easing – is an unconventional monetary policy in which a central bank purchases government securities or other securities from the market in order to increase the money supply and encourage lending and investment.

What else can the Federal Reserve do to help the economy during these times of turmoil?

With swap lines, the Fed can influence the value of the dollar.

Swap Lines – is another term for a temporary reciprocal currency arrangement between central banks. That means they agree to keep a supply of their country’s currency available to trade to another central bank at the going exchange rate and banks use it for overnight and short-term lending.

In times of economic turmoil fear increases the demand for cash and subsequently the demand for dollars, the world’s leading reserve and trading currency. That increases the cost of our goods sold to foreign investors and exports. Swap lines may help control a quick and large appreciation of the dollar against other currencies.

How can I help you?